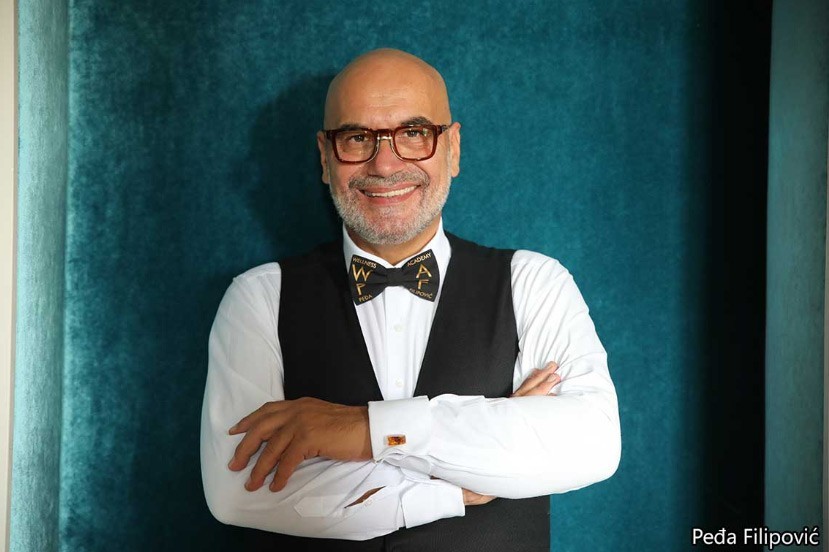 A detailed overview of Pedja Filipovic’s 30 years of work, his contribution to the country and the field of health tourism in Serbia, the countries in the region, his profession, sports and art – largely published by the renowned online magazine BGONLINE.

30 years of work of Pedja Filipovic

His contribution to the profession, country, art, sports and the quality of life of itself
At a time when holistic approach was only a vision in this geographical area, therapist Pedja Filipovic, a massage teacher, has already included this working principle into his teachings and working activities, bringing that little something extra that we all crave – a little touch of love and constant upgrading of knowledge.

In his School of Massage „Professional“, which he has been the leader of for two decades and his teachings at the Đuro Salaj Education Center, more than 30,000 students have been educated so far. Not only did various individuals realize their dreams, but their life was changed for the better through massage. Furthermore, Peđa has always done great humanitarian work.

During the 1990s, Pedja Filipović initiated an action of massaging the wounded during rehabilitation at the „Rudo“ clinic in Belgrade. Every Saturday, over the period of two years, together with his students who joined the activities successively, he visited the disabled during their period of rehabilitation, in preparation for the application of prostheses. Everybody involved contributed to their massage techniques, both psychologically and during the treatment process. In those difficult times of war, when it was impossible to find edible oil in stores, and especially massage oil, TV Studio B and Ms Bojana Lekić helped a lot . Through his public appearances, Pedja called for individuals and organizations to help and they obliged, so people with severe disabilities, a consequence of war in former Yugoslavia, were helped enormously. Mr Pedja Filipovic offered help throughout Serbia, going to different spas where the wounded were accommodated. He visited and massaged them regularly, proving that he is a genuine humanitarian, with a lot of love and empathy, helping the wounded quietly, without particularly drawing attention to himself.

Together with his students he started a massage activity for humanitarian purposes in the Home for the Elderly on Bežanijska kosa, where they helped both mobile and immobile residents through massages.

During the bombing of Serbia, he was engaged as an active member of the Anti-Stress Committee. He visited health centers throughout Belgrade and offered his advice to employees, citizens, worried parents and also organized workshops on how to breathe properly and ‘’scare’’ your fear, how to perform a massage and how to eliminate muscle cramps on the body, overcome stress with as little health consequences as possible. He concentrated on showing people how to preserve health and strength of the kidneys that respond the most to fear, especially in children, as well as consequences of uncontrolled urination.

At the beginning of the year 2000, he started a tour of humanitarian performances of his graduation play with his classmate Miroslav Nikolić with the idea of collecting school materials for children in the Kosmet enclave. After twenty performances, both in the theaters of Belgrade and throughout Serbia, with a truckload of school supplies and sweets, they went to the village of Gojbukja, where they handed out packages to children on St. Sava’s day, with the help of Kolubara and accompanied by soldiers in a peacekeeping mission.

In cooperation with BGonline.rs, he organized a humanitarian lecture and a massage workshop for pregnant women as support for family love and improvement of family communication. He has been intensively incorporating massage into the family all the time from the very beginning.

In the mid-1990s, Pedja Filipovic participated, together with his students, in the Belgrade Marathon, a triathlon in support of runners. In that period of time, the participants of the marathon started the race after having been massaged, for the first time in the history of sports in our country.

Even today, Pedja and his associates participate in a humanitarian manner as the official team of therapists of Belgrade Marathon with the Bel Hospice team.

A significant number of therapists who graduated from Peđa Filpovic’s School of Massage today are employed in eminent sports organizations and famous clubs. They are members of the Olympic teams of our athletes and travel the world with them, presenting both their abilities and the school which is the foundation of their knowledge.

In the mid-90s Pedja started massaging ballet artists together with his students, voluntarily, at the T Theatre (Terazije Theater) and the National Theatre in Belgrade.

Since the beginning of his work, Pedja Filipović has been living the art of massage with his whole being and in conjunction with his art has created the first type of unusual performance in which he has combined massage, body sculpting, using Mika Antic’s poetry as inspiration (“ The Immortal Song“), classical music (Albinoni, Kartazar, Mozart, etc.). He performed this concept as a representative of Serbia at the Budva City Theatre in 2007, making a significant step forward in the integration of the art of nurturing health, mind, body and soul. This form of expression has been declared a spiritus movens of a special type of massage called ART MASSAGE.

Contribution to the profession and health tourism of Serbia

Aware of the fact that he has recruited ambassadors of his profession in every spa that puts his trust in him, he is especially dedicated to working and creating new innovative programs. This is how it was in 1993, when massage was far from what it is today, when the wellness industry was nowhere in sight, when it was considered an ordinary type of mechanical therapy. It was then, in Prolom and Lukovska Banja, that Peđa started educating therapists in a type of massage called shiatzu (hardly anyone knew what that expression meant at the time). He created a multi layered and rich general type of massage, as well as anti-cellulite program that many therapists have since accepted and began incorporating into their work program. The beginning of the nineties, and starting with Pedja’s engagement with Prolom Banja, was his big entry into the world of classical medicine, since each of his programs was closely observed by both doctors and professional physical therapists.

A couple of years later, he began educating physical therapists of Ribarska Banja. Through many years of training they have started to completely change the concept of work and apply Peđa’s massages to patients in treatment and rehabilitation, both therapeutic and preventive, as well as lymphatic drainage. Furthermore, they have also hired Pedja to create a wellness concept that has received an enthusiastic response.

The first health wellness concept in Serbia was set up by Peđa Filipović in Banja Koviljača in 2005 and their cooperation has continued to this day, just like with many spas throughout Serbia – Niška, Junaković, Melenci…

Pedja Filipović has educated physical therapists of eminent institutions in the region – Institute for Rehabilitation and Physical Medicine „Dr Simo Milošević“ in Igalo, Banja Vrućica-Kardial in BiH, as well as therapists of the famous spas Olimija and Laško in Slovenia, Terme Tuhelj in Croatia.

Pedja has brought to Serbia and the region the famous form of water therapy Ai Chi by the Japanese author Yun Konno, who was also his teacher and has incorporated the method through education in many spas in the country and the region. He has also brought a form of rare, direct Japanese medical therapy called moxibustion, as well as many forms of shiatsu techniques and a type of massage with Tibetan bowls. He is the first in wellness rituals to connect shiatsu, moksa and cupping in the author’s ritual called Mocushi.

As a contribution to his profession and colleagues, prevention and rehabilitation, he has been intensively engaged in the media since the beginning of the 1990s. He led the School of Massage in TV shows, features in massages, reflexology, therapeutic massages, he has introduced viewers to a different approach to massage, in order for it to be part of the hygiene of life, not as a luxury but to protect the art of massage from prejudice and indecency, and he continues to bring this royal art closer to the readers, viewers and listeners of numerous media outlets, even today.

Contribution to tourism in Serbia and the region

Peđa Filipović is the creator of the first sellfness concept „Gnothi Seauton“ in the hotel Kraljevi čardaci Spa on Kopaonik, through which he constantly brings innovation in the art of massage, integrates natural elements, creates brand rituals and connects East and West, music and aromatherapy. He has taught the therapists of the Fontana Hotel in Vrnjačka Banja as well as in Merkur, created a wellness concept for the BAH Hotel in the heart of Belgrade in Knez Mihajlova Street, as well as for the Hotel Amsterdam and SAINT TEN in Belgrade. He has also presented his own rituals to the therapists of the Tornik Hotel on Zlatibor, and the therapists of the Hotel Izvor from Arandjelovac, who have also attended the trainings. With a lot of love, Pedja Filipović keeps educating employed physical therapists, and he is also the creator of the „Awakening of the 7 Worlds“ treatment, which he has begun in the Verde Hotel in Podgorica and further.

Peđa Filipović is continuously educating himself, improving and upgrading his knowledge, so in addition to Ai Chi, he has also brought the Hilling dance method of thermal water massage to Serbia. He is one of the few who trained for watsu- shhiatsu massage in the water. In order to put his concept on the pedestal of knowledge, he graduated from the International Academy of Yoga Instructors, graduated in acting and is currently preparing to defend his doctoral dissertation in the field of wellness innovation.

He is one of the favourite lecturers for physical therapy with students at the APEIRON Pan-European University in Banja Luka, where he teaches lymphatic drainage, shiatsu, foot reflexology, functional therapeutic massages, sports massage and cupping holistic ritual. Upon invitation, he has also given lectures to students of the College of Cosmetology in Ljubljana.